A while back I came up with an idea which I thought was my own and called it Courgetti Bolognese. Turns out, it’s something many people already make so it’s not exactly unique! I have however, heard of kelp noodles and although it sounded a little strange, the fact that it was a raw food, healthy and neutral in taste convinced me to give them a try. I have made three ‘recipes’ using them. The first was Lemony Prawn Kelp noodles using my Lemony Prawn recipe which I simply made and added to noodles. Then I made Kelphetti bolognese (I just made that up…) and the final genius idea was Singaporean Noodles.

I was inspired by a local restaurant that I used to purchase these wonderful noodles from made using vemicelli noodles. It contained a range of different meats including duck, chicken, beef, prawns, and I think squid. I did attempt to buy some squid for this recipe but unfortunately I wasn’t able to find some.

In a small wok, add a little bit of fat and quickly cook the beef and chicken slices with a pinch of salt and some curry powder. Remove from pan.
Add onions and other veg to wok in the order of how long it takes to cook them just enough. Veg that need more cooking should be added first. Season and add spices.
Add back the meats and throw in the kelp noodles just to warm them through and mix well. Taste and add more spice if desired or any other spices you think it needs. It really does depend on what you like. I tend to add more heat.

Plate up and eat! It’s such a quick and easy dish and you can alter it whichever way you like, add as many meats and veg as you like and really experiment with different spices. Some toasted sesame oil may be nice too but I didn’t have any and don’t really cook with it anymore but I suppose as a small treat it’s okay…

I apologise for the lack in images for this recipe. I have loads of images stored on my phone of recipes I’m supposed to be blogging but due to time constraints and a busy schedule I was unable to post any. Since then I now have a new phone and my pictures are… somewhere…. once I figure out where everything’s gone I’ll edit this recipe and possible future ones if needed and add the pictures inshaaAllaah.

I mentioned yesterday how I was going for a blood test, I had this gluten sensitivity/coeliac disease blood test form from Sept 2012 when I was told to consume gluten for 10 days straight in order to be tested. I decided against it and later discovered that gluten can lurk about for up to 6 months or something so figured I could have a blood test now. Plus with all these negative remarks about a paleo diet (because I eat fat and I’m not afraid of it!) I figured it was time for me to personally bust a few myths like “you’re cholesterol will be high” and so on. I want to prove paleo is a diet that everyone should adopt. Mostly because of the health benefits but also because it is a part of our Deen, Islaam (See previous post and download the audio inshaaAllaah).

If you follow me on Facebook you’ll also see that I’m expecting a raw milk delivery tomorrow inshaaAllaah… so excited! I’ll post more about this in the coming days, that is, the benefits of raw milk and what has been mentioned about it in the Sunnah. Yes, dairy is not a paleo food, however I can see why – when we’re talking about supermarket dairy and similar! Raw milk on the other hand is full of goodness, I doubt anyone can deny it having done some research. So I’m going to revive this Sunnah and take care of myself properly inshaaAllaah.

So anyway, I was hungry last night after a very early and very light dinner. Fasting for this blood test did not help and after that I went food shopping. Hungry old me bought an array of fruit, veg and meat and then I was stumped about what to have for breakfast. I eventually decided on a beefy omelette type thing after reading the Barefoot Coconut’s Facebook post whilst I was sat in the waiting room of the blood test centre. I came up with a new concoction: a stuffed omelette calzone. Aptly named because it contains a stuffing, the outer bit is made using an omelette and the shape or concept of it resembles a calzone. You know, the semi-circle stuffed pizza thing.

I apologise in advance for my lack of measurements. As usual I eyeball everything and today’s mixture should make 3 small omelette-calzones or 2 normalish sized ones. It depends on the size of your frying pan – I use a smaller than normal one!

Ingredients
Stuffing:
Minced beef (or other mince, finely dices meat, etc)
Half a small onion, chopped
Mixed herbs – dried or fresh, whatever you have handy really
Salt and pepper

Prep
Mince beef: pop it all into a saucepan, mix until cooked, shouldn;t take long as you’re not making a ton
Omelette, whish all ingredients in a small bowl. It’s not rocket science really. See images below and captions for further instructions.

Pour some of the omelette mix into a frying pan, make it kinda thin and make sure you have a good mix of everything in the omelette

The omelette should be sealed once you’ve folded it. If the stuffing’s spilling out you’ve probably added too much. Helps to turn the gas off at this stage if you’re a little slow with it.

My thoughts on the best type of meat for this recipe:
Mince chicken (leg and thigh is best as it has fat, chicken breast would be too dry and crumbly)
Mince Lamb (leg is best)
Mince beef (whatever the butchers have I guess)
You could use mutton too but, meh, it’s not my thing

We’re a big Asian family and so when we make this for everyone we can get through quite a bit of meat, plus it’s good to have extra so you can freeze them and take them out when you have company.
Again, I don’t measure things, I eye ball everything, really I do, I guess it’s an Asian thing although most of my friends follow recipes quite strictly. Personally I think that’s more for unexperienced cooks (unless it’s baking, of course). Forgive my lack of measuring as all quantities are up to you. Once I make the mixture I always pan fry a small tester just to make sure it’s how I like it. A good cook always tastes their food, take note!

Method
Put your mince in a large bowl. Blitz all your fresh ingredients and spices in a food processor until chopped. Not finely but not overly chunky, kinda inbewteen. Add the mixture to your mince, mix well and pan fry/grill/BBQ a taster. Add more spices depending on your preference and re-taste. Once you’re happy, pan fry, BBQ, skewer these bad boys and serve up in a non-paleo manner.

Please, do NOT deep fry these kebabs now matter what they’re for. My family have never deep fried kebabs but during Ramadhaan when people send over iftaar (may Allaah reward them in abundance aameen) or when I visit other people and I’m served kebabs, they’ve been deep fried. You have taken what could be a really healthy snack and dunk it in oil for ages until it’s over cooked, hard and INCREDIBLY bad for you.  I think it’s an Asian thing as my neighbours do this a lot and I’m sure some wedding caterers do it too. Seriously, stop it, while you’re at it, throw out your chip pan and deep fryer, you really don’t need it.

TOP TIP: For juicy, succulant burgers which are perfectly cooked and moist, just flip the burgers once. Yep, that’s the secret to a great kebab/burger.

Minced meat mix with ingredients in a bowl. 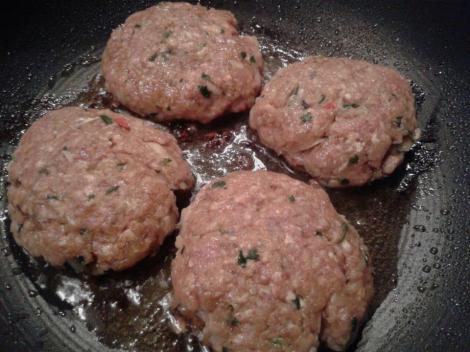 Fry the burgers well on one side before flipping. Remember just to flip once only to keep the burgers moist 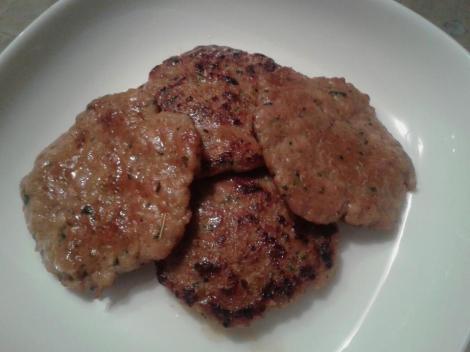 They’re not burnt lol… one side needs to be cooked well for a few minutes longer than the second side. They’re only flipped once and *I* don’t want my burgers raw thank you very much 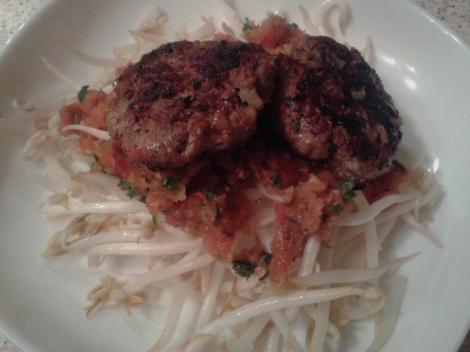 You can find my Turkish tomato salsa aka Ezme Salatasi recipe here.

This is genius! I’m only chuffed with it because I came up with this idea all by myself.
I made a massive amount of beef bolognese yesterday so I could freeze smaller batches for my Totally Paleo Pizza. I figured seeing as I made so much I may as well have it as bolognese but I don’t eat spaghetti, not even the GF kind (duh).
I’ve recently discovered that I LOVE courgettes and have been cooking Mediterranean veg quite a bit recently so I thought, ‘How about I make some courgetti?!’

For this courgetti I used courgettes and carrots. I would have used bean shoots too but we didn’t have any, plus this was a quick thing. 1 medium/small courgette and 2 medium/small carrots.
After peeling and washing the carrots I used this cool potato-kinda-peeler-gadget thing we have that shreds veg into spaghetti-like strips (or julienne slices) and I did the same to the courgettes (I didn’t peel them)

I added a light spray of EVOO and a tad bit of ghee. Tossed the carrotetti(?) in the pan first, then the courgetti, just for a couple of minutes with a bit of salt and pepper.
You could also have this raw! I would add the bean shoots raw next time, just so there’s more of a crunch.

My bolognese recipe will be posted separately.

Edit: Apparently making “spaghetti” with courgettes has already been done and it’s old news. I’m still holding onto my genius title because I never heard of it! Alhamdulillaah, it was good to discover something for myself instead of reading about it somewhere.

Quickly frying the courgetti for a couple of minutes